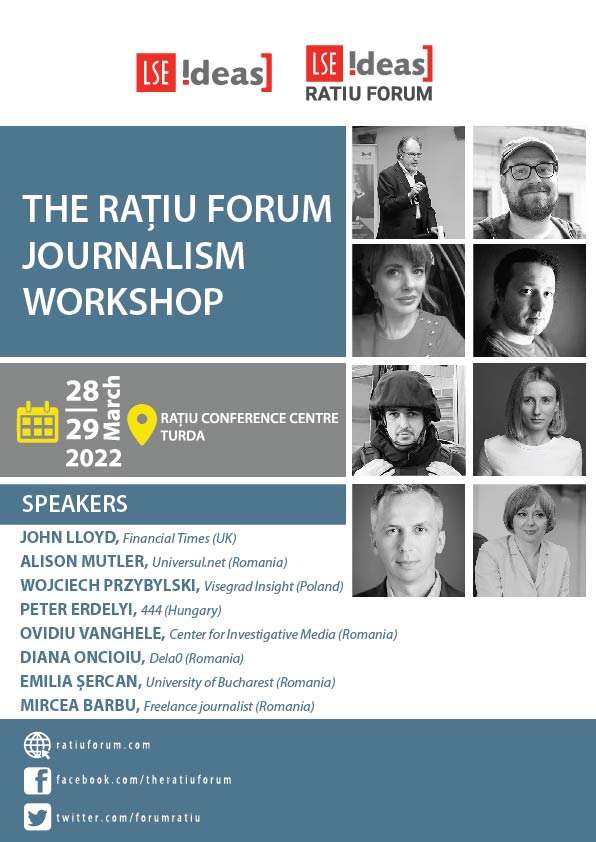 The Ratiu Forum Journalism Workshop is open to professional journalists from Romania and the region.

Applicants will go through a selection process. Accommodation and meals will be covered by the organisers.

Session one: Journalism in Central Europe

This panel will look to investigate the continued decline of (most) newspapers and (many) magazines in the print media – a phenomenon which is felt across the globe – whilst analysing the seemingly opposite successes of investigative journalism, a cause close to the heart of The Ratiu Forum’s work.

Another main element analysed here is the role of journalism and social media, its progressive work in providing access to information, whilst also opening itself up to scrutiny in its objectivity, with John Lloyd from the Financial Times focusing on the question is objectivity in journalism no longer prized? Finally, this panel will analyse the journalism industries of China and Russia, looking into its silencing and the way in which freedoms have been habitually repressed.

Summary
These three experienced investigative journalists have all played a major role in bringing to the public’s attention great breeches of trust in political and judicial institutions across Romania, for which they have been honoured with the Ion Ratiu Journalism Award. Emilia Sercan, in her 2015 investigation on the doctoral plagiarism of Vice Prime Minister Gabriel Oprea, battled through threats to her life, and active barriers to access of information. Since then, however, she has continued to publish hundreds of investigative stories alongside her role as lecturer of the Faculty of Journalism and Communication Science, University of Bucharest. Ovidiu Vanghele received his award for his investigative piece Toți oamenii generalului, that investigated the fortune of former Vice Prime Minister Gabriel Oprea and his investigative series Harta mortii – o radiografie la detaliu a dezastrului din asistența socială românească on the nearly 5000 mentally ill patients who have died over a five-year span in institutionalised centres. Diana Oncioiu was nominated for Dreptate strâmbă: 3 din 4 cazuri de acte sexuale cuvictime copii sunt judecate în instanțele românești ca fapte consimțite, an investigation regarding the trialling of sexual abuses against minors by Romanian courts. She sheds a light on a painful reality in Romanian courts: the tendency of judges to assume that sexual relations took place with the acceptance of the child-victim. This is despite the condemnation of the Romanian State by the European Court for Human Rights, which concluded that the Romanian criminal-law system had failed to legally protect children against degrading treatment and to pursue the best interests of minors in the administration of justice. In this panel they discuss their individual works, whilst providing guidance and answers to early-career journalists looking to forge a similar path.

Summary
This keynote speech will describe Professor Deletant’s impressions of his early visits to Romania, from 1965 to 1969, including his tenure of a British Council nine-month scholarship to the country in 1969 that afforded the opportunity to act as a translator for the US ABC network during the visit of President Nixon in August 1969. Notwithstanding his experience of shaking the President’s hand. It will continue with an account of the bureaucratic hurdles that reporters had to surmount between September 1972 and January 1973, both professionally and personally, most notably in his marriage to Andrea Deletant, a Romanian citizen. Marriage, contact with his wife’s family, and friendship with writers and former political prisoners gave Professor Deletant an insight into the strictures of the communist regime which led the BBC World Service to conduct frequent interviews with him from 1987 to the late 1990s on events in Romania. In late December 1989, he joined John Simpson, first in London and then in Bucharest, as a consultant to the BBC during the Romanian revolution. Between 1990 and 2004, Professor Deletant was an observer for the CSCE/OSCE during each of the Romanian presidential and parliamentary elections; all experiences he will share with us in this keynote, speaking to their impact on the past and their effects still felt today.

Summary
This session will focus more on how Romanian journalists can perform their roles effectively in a country where access to information can often be difficult for journalists, especially those working for independent press projects. However, this panel will also analyse how Romanian journalists can effectively work outside the country as a freelancer or even work abroad. Speaking on their own experiences, the speakers will discuss the varied breadth of exposure and skills gained from becoming a cross-border journalist, whilst also answering questions on how to effectively produce safe and excellent quality journalism in today’s Romania.

Session five:  Authoritarianism and the media

Summary
Authoritarianism’s effect on the media of the states is not an under-discussed topic and the lasting effects of authoritarian regimes on media institutions cannot be understated. With a history of such regimes in the Central and South-Eastern European region, this panel will seek to investigate the effects of history on today’s press, whilst also looking at some more blatant breeches to freedom of speech some countries are experiencing today.

Alison Mutler studied Romanian literature and language at the University of London and graduated in 1987. She first reported from Romania, Bulgaria and Moldova before communism ended, and was in Romania, working for British television station ITV during the 1989 anti-communist revolt.  She moved to Romania in 1991 and joined the Associated Press which she left last year after 25 years. She has been president of the now defunct Foreign Press Association. She is now a correspondent for Romanian startup news site, universul.net. She occasionally freelances for Coda Story and Radio Free Europe among others.

Ovidiu Vanghele started his career in 2002 at MEDIAFAX Agency. During his ten years in the press agency he gradually became interested in more detailed subjects, closer to investigative journalism. He then joined the Pro TV news team. Less than a year later, he chose to leave mainstream media, founding the Center for Investigative Media, the entity he heads ever since. In the last seven years, Ovidiu published several press investigations tracing millions of euro spent pointlessly, illegally or simply stolen. His best known investigations focused on the abuses from mental health centers, the Romanian Academy monetary frauds, the National Railway Company’s contracts. Most of these also became judiciary investigations. He has spent almost the entire 2016 documenting, together with Ana Poenariu (Rise Project), the series “Toți oamenii generalului”, tracking the personal and financial development of Gabriel Oprea. In 2017, together with Vlad Stoicescu (dela0.ro), he set up a journalism platform aimed to better understand the relationship between the Churches in Romania and state institutions. Funded by its readers, the online project “Let there be light!” is, to many, an example of how journalism can survive in these tough times. He also teaches journalism at the University of Bucharest.

Mircea Barbu is a freelance journalist, reporting as a war correspondent for several publications in Romania and abroad. In the last years, he has been reporting from Syria, Iraq, Crimea, the Gaza Strip and Ukraine about the fate of the civilians trapped in conflict areas, about migration and human rights.

Currently a reporter working for the alternative publication Dela0,  Diana Oncioiu is also a member of the Să Fie Lumină project, initiated by Dela0.ro and the Center for Media Investigations. She has a background in broadcasting, having worked for five years for Realitatea TV and Digi24. She covers mainly social topics – domestic violence, education, social assistance, extreme poverty, social exclusion – and is the author of a series of in depth reportages covering topic like: the social reintegration of former inmates, life in the undergrounds of the Bucharest neighborhood Ferentari, human trafficking and the trialing of sexual crimes with child victims. Diana Oncioiu is the 2020 recipient of the Ion Ratiu Journalism Award.

Emilia Șercan is an investigative journalist with 24 years of professional experience. She is also a lecturer at the Faculty of Journalism and Communication Sciences (University of Bucharest). In national media, she worked for Curierul Naţional and Evenimentul Zilei newspapers, and also for the Realitatea-Cațavencu media trust. As of 2015, her investigations can be read on PressOne.
She has signed over 4.000 investigations, interviews and columns on various topics of public interest in Romania (Mătuşa Tamara, Afacerile din energie ale “băieţilor deştepţi”, Afacerile de după FNI ale lui SOV, Averea lui Dan Ioan Popescu, Dosarul Bancorex, Ziarişti – foşti informatori ai Securităţii, Afacerile lui Puiu Popoviciu). In the last five years she covered extensively the topic of plagiarism in doctoral theses, publishing investigations about the works of several Romanian politicians or public figures.
In 2013 she obtained her PhD in Communication Sciences with the distinction “excellent”, publishing her doctoral thesis – Cultul secretului. Mecanismele cenzurii în presa comunistă (Polirom). In 2017 she published another book – Fabrica de doctorate: Sau cum se surpă fundamentele unei nații (Humanitas).
Emilia Șercan won several scholarships, both as a teacher and as a journalist. She was thus a US State Department Fellow at Ohio University (2016), a scholarship holder at Standhal University Grenoble 3 (2012 – 2013) and at Freedom House Scholarship in the USA (2004). Over the years, he has won several professional and academic awards: Journalist of the Year – SuperScrieri Awards (2016), Freedom of Expression Award – Active Watch (2016), Ion Ratiu Journalism Award (2016 ), Professor of the Year – ANOSR (2017), “Nicolae Iorga” Award of the Romanian Society of Historical Sciences, European Network for Academic Integrity Award (2019) and the Award the Group for Social Dialogue – GDS (2020).

Peter Erdelyi is senior editor / director at one of Hungary’s last independent media outlets, 444.hu. His role includes audience growth, diversifying the business model and funding opportunities, and commissioning special content projects about pressing issues in Hungary. Before this, Peter was an investigative reporter covering stories related to national security, covert foreign inﬂuence, corruption, hate groups and the rule of law, with a speciﬁc focus on judicial independence.