The COVID-19 pandemic has brought into sharp focus the need for accurate and relevant data, but in the 24/7 newsroom information is often reproduced without question. This workshop asks:
Where do we get our facts from? How do we check them? How do we present them?
In this 60-minute webinar, experienced international news correspondents Alison Mutler (universul.net, former AP) and Alexandru Alexe (formerly AP) will discuss how best to understand, interrogate and contextualise information and data received from officials and newswires.

In conversation with participants they will examine examples of information presented misleadingly or uncritically, and the serious problems that causes both for the reader and the journalist. 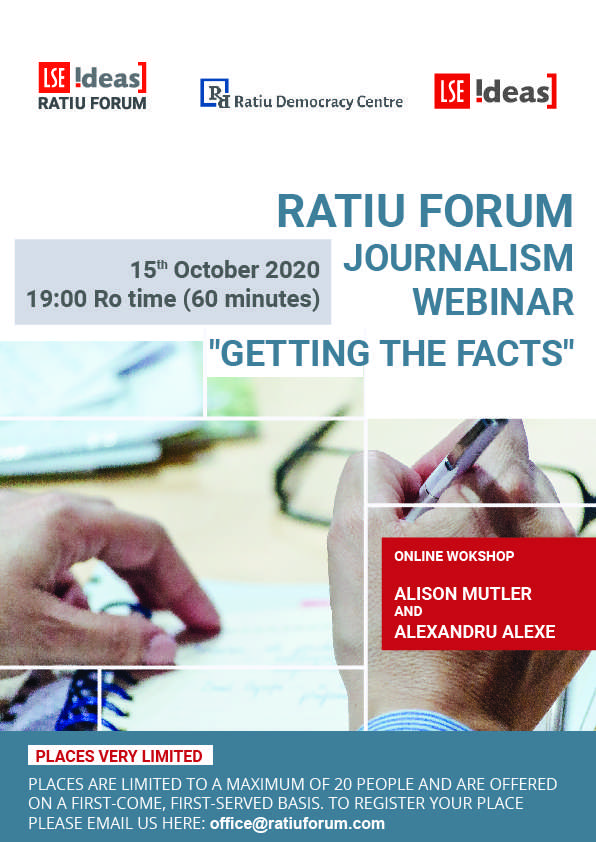 This event will be held on Zoom and is in English.

Places are limited to a maximum of 20 people and are offered on a first-come, first-served basis.

To register your place please email us: office@ratiuforum.com

Alison Mutler studied Romanian literature and language at the University of London and graduated in 1987. She first reported from Romania, Bulgaria and Moldova before communism ended, and was in Romania, working for British television station ITV during the 1989 anti-communist revolt.  She moved to Romania in 1991 and joined the
Associated Press which she left last year after 25 years. She has been president of the now defunct Foreign Press Association. She is now a correspondent for Romanian startup news site, universul.net. She occasionally freelances for Coda Story and Radio Free Europe among others.

Alexandru Alexe has 20 years experience in journalism, marketing and public relations. A former reporter with the Associated Press from 2000 to 2007, Alex worked in Romania and in Michigan, USA, covering a wide variety of stories, including politics, business, culture and sports. He continued to write op-eds in Romanian outlets such as Libertatea, Reporter Global and contributed commentary to television stations including Realitatea TV (re. the US elections), Digi24 (on the pandemic), B1TV and Aleph News (on US events). Since 2008 Alex has worked in public relations, managing the Romania office for Cook Communications, the largest independent agency in Central and Eastern Europe. He has also worked for US public relations companies AB Data and Kinsella Communications, including on high profile campaigns such as the Swiss Banks Holocaust Victims’ Assets Litigation, which led to a $1.25 billion settlement. Alex studied Statistics at the Academy of Economics (1990-1994) and then obtained a Master of Science degree (1997) from the University of Texas at Tyler in economics, journalism and political science. He then took post-graduate classes as a doctoral student in international relations at the University of North Texas during 1997-1998, where he was a teaching assistant and a research assistant in the political
science department. Alex is also active in the civic sector as a volunteer with nonprofits such as the Friendship Ambassadors Foundations, the Association for Civic Education and Dialogue, Iowa CCI, the Sierra Club and various other non-profit groups and campaigns.