The Ratiu Dialogues on Democracy

The Ratiu Dialogues on Democracy is an event held annually, organized by The Ratiu Forum in partnership with LSE IDEAS. The overall purpose of this lecture series is to strengthen discussions and visions on democracy. We aim to have the Dialogues develop as a meeting place for professionals with diverse backgrounds who share an interest in current challenges facing Balkan nations, with a particular emphasis on Romania. 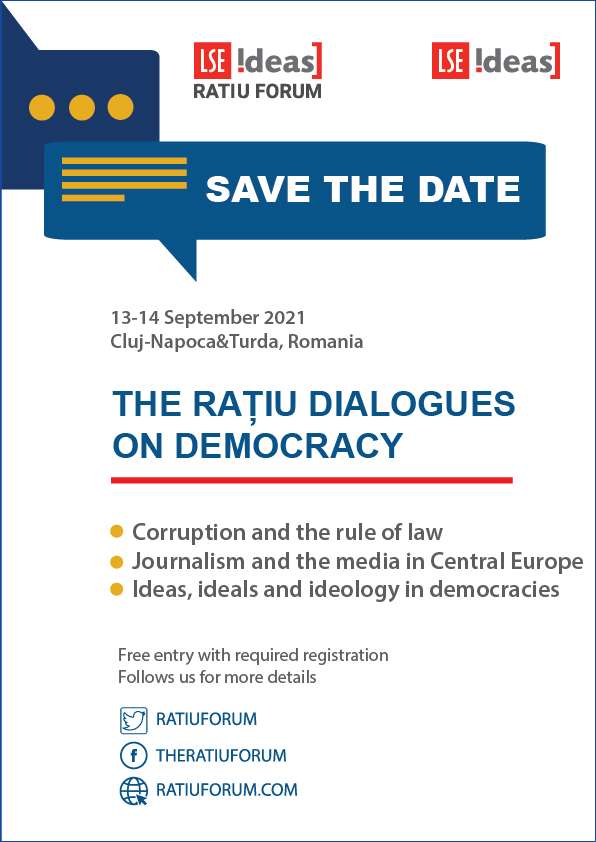 The Dialogues on Democracy conference will be opened by the Chairman of the Ratiu Family Foundation, Mr Nicolae Ratiu, with a brief overview of the Ratiu family’s history and interest in democratic resilience that will be covered. He will introduce the internationally renowned speakers from academia and government who will share their expertise with us over the two-day event. 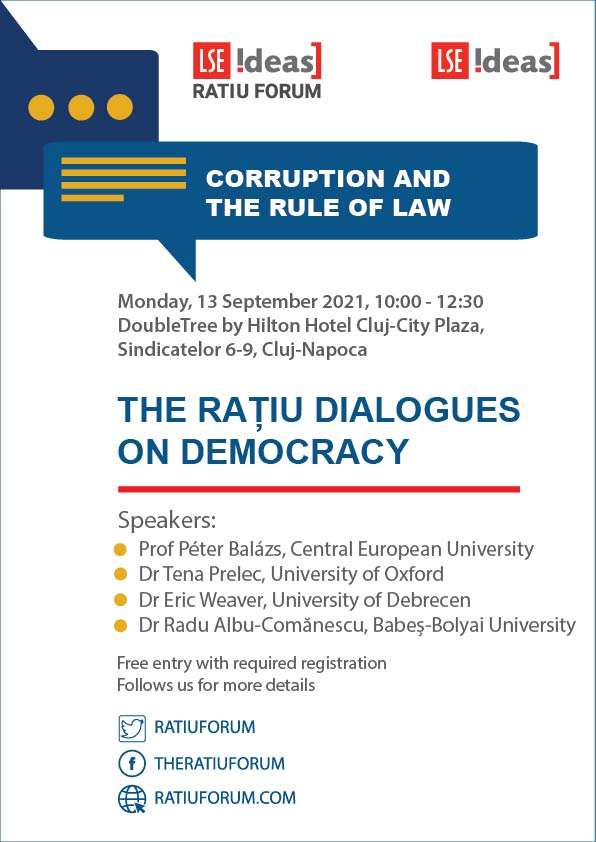 Panel: Corruption and the rule of law

Corruption occurs in every part of the world, but few regions have witnessed such stark challenges to the rule of law in recent years than Central Europe – in Hungary most clearly, and also in Poland, Bulgaria and elsewhere. Measures by NGOs such as Freedom House and Transparency International indicate that many Central European countries are experiencing a marked decline in the transparency and independence of judiciaries, and growing clientelism in the political sphere.

What are the characteristics of contemporary threats to the rule of law in the region? What mechanisms exist, or should exist, to resist growing corruption and threats to independent legal oversights? Our experts will bring insights from their work in academia, politics, and policy analysis to consider how best to hold governments and people in power to account within a liberal democratic, EU-wide framework.

Péter Balázs held numerous senior diplomatic and government positions in Hungary, including as Foreign Minister (2009-2010) and Hungarian Ambassador to the EU (2003-2004). He was the Government Representative of Hungary in the European Convention drafting the Constitutional Treaty which has become, after several modifications, the Lisbon Treaty. In 2016 he received the Dr. Jean Mayer Global Citizenship Award by Tufts University and the Institute for Global Leadership “in recognition of his integrity and valor as Foreign Minister, encouraging respect for humanities values and rule of law and fighting discrimination.”

Tena Prelec is a Research Fellow at the Department of Politics and International Relations (DPIR), University of Oxford, and a Research Associate at LSEE-Research on South Eastern Europe, LSE.

Eric Beckett Weaver is a historian and political scientist at the Department of Political Science, University of Debrecen. Dr Weaver’s expansive research covers politics and history, international history and politics and comparative politics.

Radu Albu-Comănescu, PhD in History and Lecturer at the Faculty of European Studies of the Babeş-Bolyai University in Cluj-Napoca, Romania. Teaches “EU Governance and Theories of European Integration”, “European and International Negotiations” and “Cultural Heritage Management”. Fields of research extend to the history of Europe; history of political and religious thinking; cultural, economic and public diplomacy, as well as governance, state-building and networks of power. 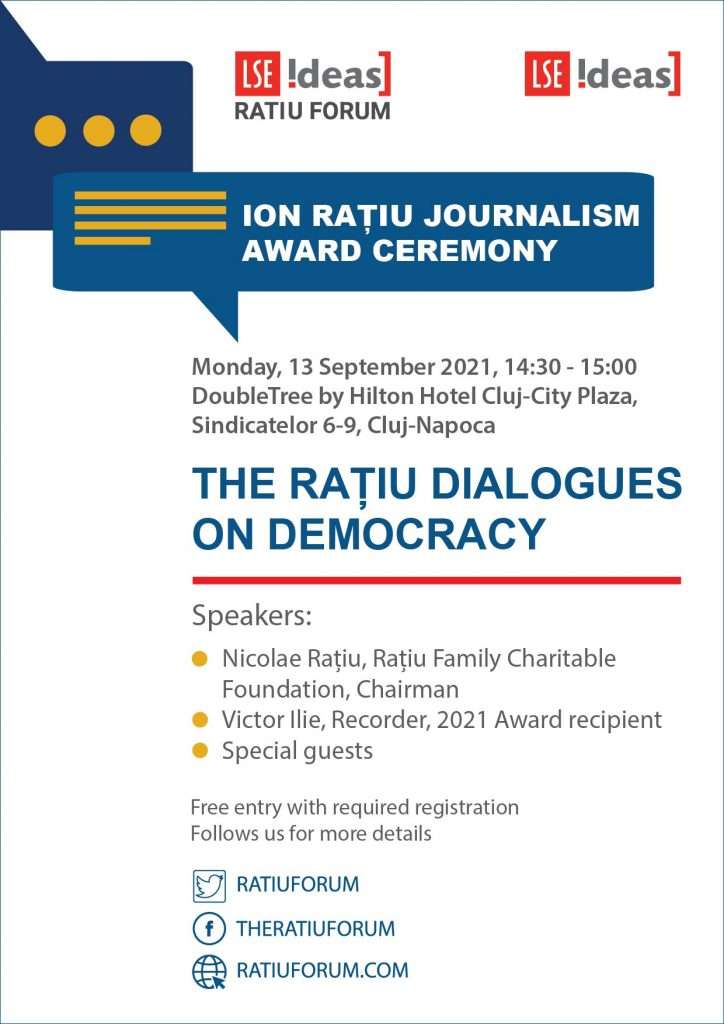 With an introduction by Nicolae Rațiu, Chairman of the Rațiu Family Foundation, and an address by this year’s recipient of the Ion Rațiu Journalism Award, Victor Ilie, who currently reports for Recorder.

In November 2020 Victor Ilie published the investigation that discovered and brought to the public’s attention the “King of the pandemic”, the main person responsible for purchasing vital medical equipment for the Romanian state and its citizens, a master of a “kingdom” dominated by corruption, defiance and incompetence.

According to the members of the Jury Committee that evaluated this year’s proposals, the article written by Victor Ilie is an example of quality journalism produced by an independent press project, an investigation carried out at a time when the access to information was often limited for journalists. Read the press release here. 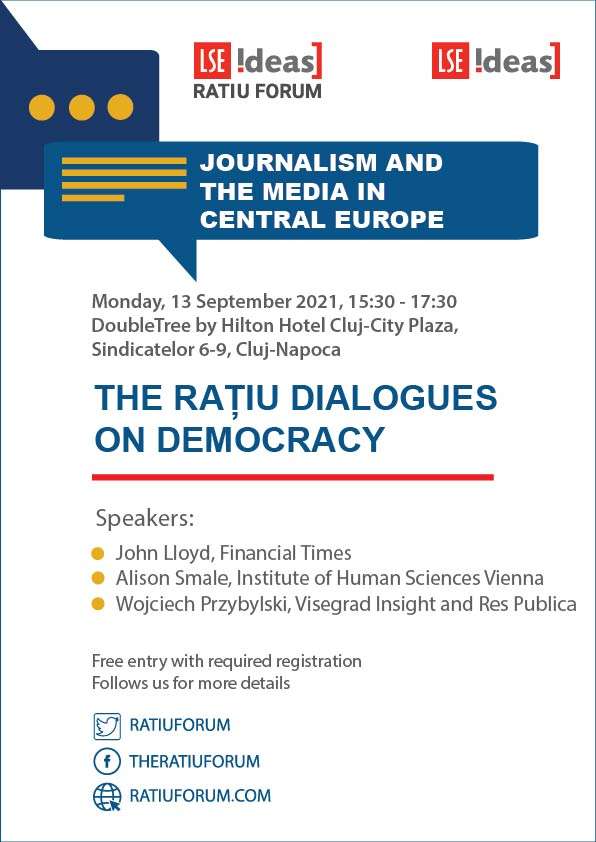 Panel: Journalism and the media in Central Europe

A free press is a hallmark of a free, liberal democracy: journalists hold governments to account, keep citizens informed, and expose wrongdoings by those who wield power and influence. The media, however, can also hold considerable influence itself, and is continually at risk of political and business interference. These tensions have come to particular prominence in Central Europe.

To discuss the state of the media in the region, this dialogue brings together journalists with a wealth of experience reporting in, and about, the Central European region:

John Lloyd is a Contributing Editor at the Financial Times, and Chairman of the School of Civic Education (Russia). He was based in the USSR and Central Europe in the 1980s and 1990s as East Europe Editor and the Moscow Bureau Chief

Alison Smale reported from Central Europe for many years, for the United Press International, the Associated Press, The New York Times and the International Herald Tribune. She served as the Under-Secretary-General for Global Communications, and is now researching Central European media at the Institute for Human Sciences in Vienna. 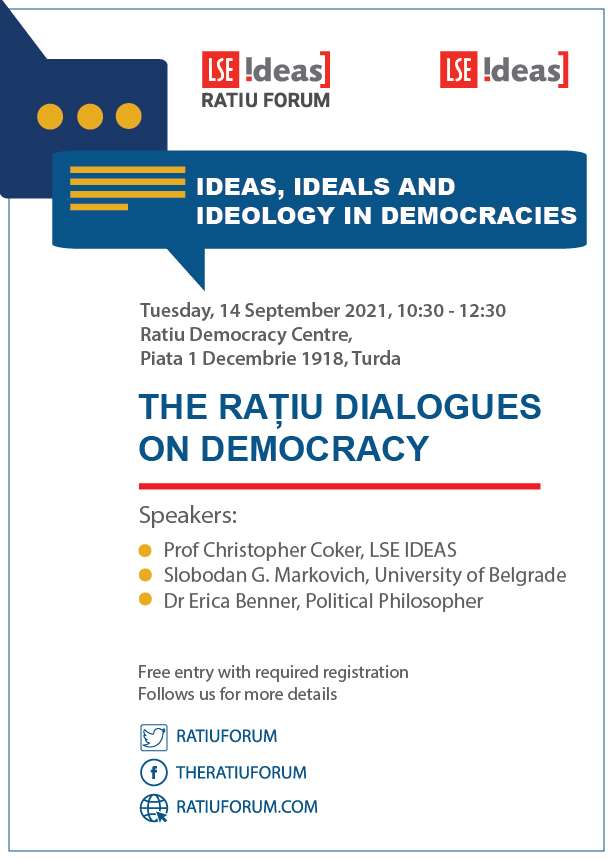 Do – or should – ideals, or ‘values’, matter in a democracy? What are the differences between values and ideology? Have post-cold war democracies lost sight of their ideals? Are we living in a post-ideological age?

In this wide-ranging discussion, Professor Christopher Coker, Professor Slobodan Markovich and Dr Erica Benner will explore the ways in which ideas, ideology, pragmatism, and realpolitik do – and should – influence domestic and international politics.

Christopher Coker is Director of LSE IDEAS, LSE’s foreign policy think tank. He was Professor of International Relations at LSE, retiring in 2019. He is a former twice serving member of the Council of the Royal United Services Institute, a former NATO Fellow and a regular lecturer at Defence Colleges in the UK, US. Rome, Singapore, and Tokyo. He has been a Visiting Fellow at the National Institute for Defence Studies In Tokyo, the Rajaratnam School for International Studies Singapore, the Political Science Dept in Chulalongkorn University, Bangkok and the Norwegian and Swedish Defence Colleges.

Slobodan G. Markovich, MBE is a Full Professor at the School of Political Science of the University of Belgrade where he lectures Political Anthropology, Political History of South-East Europe and Image of European Other. He is also a Full Professor at the Institute for European Studies in Belgrade. He has been Research Associate at LSEE/LSE since 2012, and at LSE IDEAS since 2018. He has been the head of the Centre for British Studies at the School of Political Science in Belgrade since 2017. His research interests include Construction of Ethnic/National and Religious Identities in the Balkans, British-Balkan Relations, psychoanalytic anthropology, and History of European Pessimism. 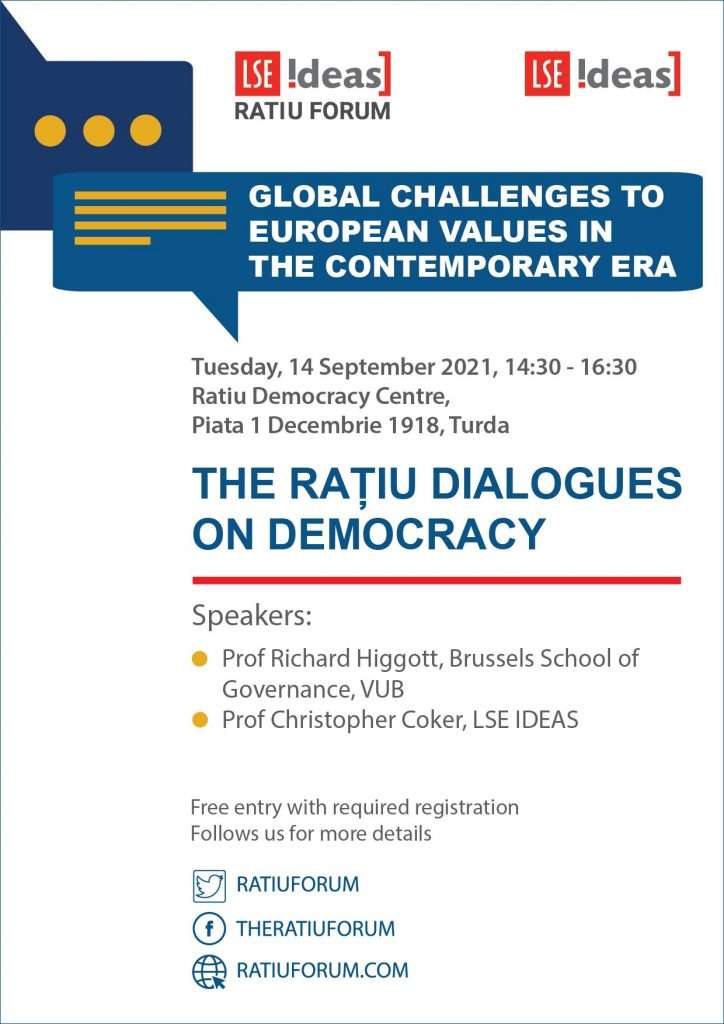 Are there values that are exclusively European? Values that are often attributed to Europe—and sometimes called universal values—are currently contested not only outside Europe but inside Europe too. If we can identify core European values, what are the challenges that Europe faces in both defending them and advancing them in the wider global context in the current era?

In this keynote address, Professor Higgott will embed the discussion of European values in a comparative global context, with reference to Asia in general and China and India in particular.

Christopher Coker is Director of LSE IDEAS, LSE’s foreign policy think tank. He was Professor of International Relations at LSE, retiring in 2019. He is a former twice serving member of the Council of the Royal United Services Institute, a former NATO Fellow and a regular lecturer at Defence Colleges in the UK, US. Rome, Singapore, and Tokyo. He has been a Visiting Fellow at the National Institute for Defence Studies In Tokyo, the Rajaratnam School for International Studies Singapore, the Political Science Dept in Chulalongkorn University, Bangkok and the Norwegian and Swedish Defence Colleges.

Ratiu Dialogues on Democracy 2021 - COMING UP

The international Ratiu Dialogues on Democracy conference returns on Monday 13th and Tuesday 14th September to Cluj-Napoca and Turda, Romania.
This prestigious two-day event will feature discussions on important topics relating to democracy in the region by internationally renowned speakers from academia and government. Audience members will have the opportunity to ask questions and to engage with some of the world’s leading thinkers on democracy and European identity.
The event will feature keynote speaker Professor Richard Higgott from the Brussels School of Governance, and there will be three panel discussions on the role of journalism and the media in Central Europe, authoritarianism and liberalism, and corruption and the rule of law.

This year we are delighted to announce that the line-up will include:

More speakers will be announced in due course.

The Ratiu Dialogues on Democracy is an annual event held with the purpose of strengthening discussions and visions on democracy. The Dialogues event is a meeting place for diverse professionals who share an interest in current challenges facing Balkan nations, with a particular emphasis on Romania. Previous speakers have included Professor Michael Cox, Professor Michael Clarke and the Rt Hon. Lord David Owen CH FRCP.

This event is jointly organised by the Ratiu Forum, based in Turda, and LSE IDEAS, a foreign policy think tank affiliated with the London School of Economics and Political Science (LSE).
The Ratiu Dialogues on Democracy conference is scheduled to take place in person, although it will be moved online if the coronavirus situation makes an offline event unsafe.

This website uses cookies to improve your experience while you navigate through the website. Out of these, the cookies that are categorized as necessary are stored on your browser as they are essential for the working of basic functionalities of the website. We also use third-party cookies that help us analyze and understand how you use this website. These cookies will be stored in your browser only with your consent. You also have the option to opt-out of these cookies. But opting out of some of these cookies may affect your browsing experience.
Necessary Always Enabled
Necessary cookies are absolutely essential for the website to function properly. These cookies ensure basic functionalities and security features of the website, anonymously.
Functional
Functional cookies help to perform certain functionalities like sharing the content of the website on social media platforms, collect feedbacks, and other third-party features.
Performance
Performance cookies are used to understand and analyze the key performance indexes of the website which helps in delivering a better user experience for the visitors.
Analytics
Analytical cookies are used to understand how visitors interact with the website. These cookies help provide information on metrics the number of visitors, bounce rate, traffic source, etc.
Advertisement
Advertisement cookies are used to provide visitors with relevant ads and marketing campaigns. These cookies track visitors across websites and collect information to provide customized ads.
Others
Other uncategorized cookies are those that are being analyzed and have not been classified into a category as yet.
SAVE & ACCEPT